BEFORE CHAPTER NINE OF PART I IS SINCERE RESEARCH WHILE LIVING A SPIRITUAL TRADITION. WHAT FOLLOWS IS SPECULATION AND EXPERIMENT THAT EXTRAPOLATES FROM THE PREVIOUS EXPERIENCE.

It’s allegory, sorry- and there be monsters… 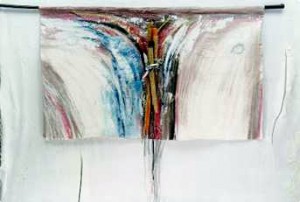 A bundle of sacred objects hung on a sculptural ‘ground’ implies a secret realm of the ‘Other’ world. The ‘bundle’ becomes a conduit of ineffable energies.

…Bishop, now begins something that is for me very interesting, very important. During the year preceding the 2nd Yemen trip, I re-wrote the story that I have been telling you, but rearranged its various elements into a more fictional context. This process produced the new symbols, characters and understandings necessary for a shamanistic consciousness to structure the “problem” into an other-world scenario wherein the issues at hand could be isolated, amplified and resolved in a way effecting the reality of this world. There is, at least, a mutual fecundation between worlds that takes place. In other words, the process produces a ‘gospel’, a ‘god word’, ‘word of power’ sufficient to effect change in this world, in the rhythm of Being itself or at least in the direction of the “human project.”

The personality of the main character is broken up into several characters, but not schizophrenically as happens in the natural world, rather artfully in order to heal the diabolic, uncontrollable, actual schizophrenic rending of the integrity of creation.

As you know Bishop, in various religions there are two ‘ways’, the way of Life, (Truth, Spirit, Wisdom) and the way of Death or Sin. The second way is characterized by the figure of the Prince of Lies, delusion, deceit. But there is another kind of lie. That is the lie that tells the truth–Art. Art creates something ‘artificial’ to deceive deception, (the Sin of ‘self’) and to survive ‘Satan’, the ‘test’ of the world. Thus I use art as a means in this battle of Being, of perception, of Self. Also, telling this story at the proper moments, ‘communicates me’ with the deeper Powers of this ritual and gives me the energy for its completion. 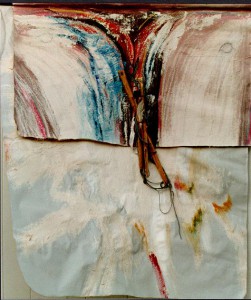 A bundle of sacred objects hung on a sculptural ‘ground’ implies a secret realm of the ‘Other’ world. The ‘bundle’ becomes a conduit of ineffable energies.