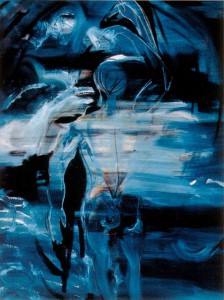 Oil on Canvas 5′ x 3′ 1987  -One who creates and recreates… the one who searches between worlds… Such a shaman/artist/priest/poet/(warrior) explored here is a primordial figure whose personality and cultural function attempts mediation of the affairs of this world with the intentions of the divine spirit or non-temporal world. This figure fights the battle for sentient being.

Title Pages, Directional Comments and Table of Contents Below

Chapter/Contents to the Right Above

A Black Dragon’s History of the World

“…Yoga teaching rejects all fantasy contents and we do the same, but the East does it on quite different grounds. In the East, conceptions and teaching prevail which express the creative fantasy in richest measure; in fact, protection is required against the excess of fantasy. We, on the other hand, look upon fantasy as valueless, subjective day-dreaming. Naturally the figures of the unconscious do not appear as abstractions stripped of all imaginative trappings; on the contrary, they are embedded and interwoven in a web of fantasies of extraordinary variety and bewildering abundance. The East can reject these fantasies because long ago it extracted their essence and condensed it in profound teachings.”
C. Jung
THE SECRET OF THE GOLDEN FLOWER

“…it takes a priest to see the problem, it takes a sorcerer to solve it.”
I CHING

is a 21th Century guide to consciousness. It is a personal encounter with: Shamanism, Buddhism (Yoga), the Hesychasm (Christianity), Contemporary Critical Thought– (Ph. D. dissertation, Berkeley)… …and with interstate Hitchhikers in an age of Free Agent, Business Warriors riding their steeds along the precipice of eternity. Rock shards fly, also free, as the war party passes–sparked blithely, we slip clueless into the Abyss.

records the original and spontaneous, sometimes paranormal, pacific rim experiences that set this project in motion. Here flows the kindness of god and the adventure of the road. This record is in the form of a letter from a priest to his bishop, explaining why the bishop should not suspend him.

records a series of experiments trying to communicate more widely the surprising contents of Part I.

of NEPSIS: LETTER TO A BISHOP continues the account of the original experiences referred to in Part I. Though the experience itself continues in violence and darkness -working its way–“to a light that casts no shadow”–The WAYS of RIGHT alone, so modestly, authentically, and honestly have somehow failed to save us from our arrival at this viciously dangerous, historical moment!

Yet, perhaps there is still a way between…

-Central topics are introduced and addressed in a letter to a certain Roman Catholic Bishop because, providentially, he acted when others were only in a daze.

-A personal and Artistic history of Homo Sapiens Sapiens is begun.

-Art is described as the “lie that tells the truth.”

-The method is indicated.

-Spheres of influence are defined in a list of technical definitions.

-The author’s intentions are declared.

-Various aspects of the main character are described and the influences formative to his unusual personality are presented.

-The first pilgrimage, a quest, is described with the central “problem” of the story clearly suggested.

-An approach to formal martial arts training is described and distinguished from the experience of the main character.

-Main character is taken aback by the esoteric, eclectic color of his own benignly “Southern Gothic” experience.

-Abstract poetry is provided but sage warning is given about its consumption.

-Brief mention is made of unrequited love, an important theme for later alchemies.

-An apology about the text getting too personal is made.

-Some comments about Abstract Art.

-Disaster in the monastery.

-Pilgrimage and discernment of vocation?

-Art, Culture; prescience of Tantric mural of the Resurrection.

-The “Grand Affair” of spiritual vocation kicks in.

-The savage, but handsome, young man.

-Pilgrimage to test the effects of pilgrimage.

-Shamanism, Buddhism, Panikkar and the Black Widow are introduced.

-We arrive in India.

-What was supposed to happen. What really happened.

-The flight home: A vision.

-Who followed us home?

-Preparation is made for Greece Pilgrimage.

-Death of the Sacred King

-The “problem” of this story is stated (again) and a solution to be tried.

-2nd Cuernavaca and the Mexican earthquake, the body-earth connection.

-The Black Widow, my familiar.

-Prescience of Egypt and the Golden Light.

-The mural engages its magic.

…Bishop, now begins something that is for me very interesting, very important. During the year preceding the 2nd Yemen trip, I re-wrote the story that I have been telling you, but rearranged its various elements into a more fictional context. This process produced the new symbols, characters and understandings necessary for a shamanistic consciousness to structure the “problem” into an other-world scenario wherein the issues at hand could be isolated, amplified and resolved in a way effecting the reality of this world. There is, at least, a mutual fecundation between worlds that takes place. In other words, the process produces a ‘gospel’, a ‘god word’, ‘word of power’ sufficient to effect change in this world, in the rhythm of Being itself or at least in the direction of the “human project.”

The personality of the main character is broken up into several characters, but not schizophrenically as happens in the natural world, rather artfully in order to heal the diabolic, uncontrollable, actual schizophrenic rending of the integrity of creation.

As you know Bishop, in some religions there are two ‘ways’, the way of Life, (Truth, Spirit, Wisdom) and the way of Death or Sin. The second way is characterized by the figure of the Prince of Lies, delusion, deceit. But there is another kind of lie. That is the lie that tells the truth–Art. Art creates something ‘artificial’ to deceive deception, (the Sin of ‘self’) and to survive ‘Satan’, the ‘test’ of the world. Thus I use art as a means in this battle of Being, of perception, of Self. Also, telling this story at the proper moments, ‘communicates me’ with the deeper Powers of this ritual and gives me the energy for its completion.

Works from Part II can be found in NEPSIS FOUNDATION: THE ORACLE OF XIBALBA

-The natural efficacy of disaster

-The I Ching speaks

-The Deer God and Salvation

-Fecundating the Great Spider in Mazatlan

-Rainstorms, Sharing and the Snake

-In Hawaii there is an unexpected message from “them.”

-Agnes, the California Earthquake and the Taj Mahal.

-The Dragon Man, Total Identification and Mother Theresa (I met her there).

-There are the Last stories

-Important P.S.s… (The point being neither the Bishop nor Fr. Chris.)

How Dionysius Saved His Mother From Hell, Book Three:

APPENDICES and BIBLIOGRAPHY for the whole of NEPSIS can be found at the end of INTERSTATES: THE DISSERTATION. Bibliography includes: Panikkar, Shamanism (Zuni) Buddhist and Indian Sources, Christianity, Aesthetics, Martial Arts…