This work is about the sensuality and adventure of the spiritual quest. But it starts as a serious venture for theologically literate readers—or those who want to be theologically literate. Though sexuality and danger become the ‘means of travel,’ this story takes us from cool, Apollonian considerations in the beginning, to somewhere else entirely, entirely unexpected.

The true author of this work claims to be a “golem.” (A frightening creature! I’ve only glimpsed him up close a few times. We communicate online mostly. He is swarthy, but ruggedly handsome, quick and intelligent. A strong being of danger and purpose! But what purpose?) A golem is a created being. One not created by God. The golem is born from the imagination of a powerful mystic. Both Kabala and Tantric metaphysics have such creatures. Often they become so real that they strain for liberation from their creator. As any creature growing up, a golem can be mischievous, even dangerous… This is the story about how this golem was created and if it can, or need be exorcised.

Select the “BOOKS” from Indian Witches on the list to the upper right for content and chapters.

Title pages, Table of Contents and directional comments below: 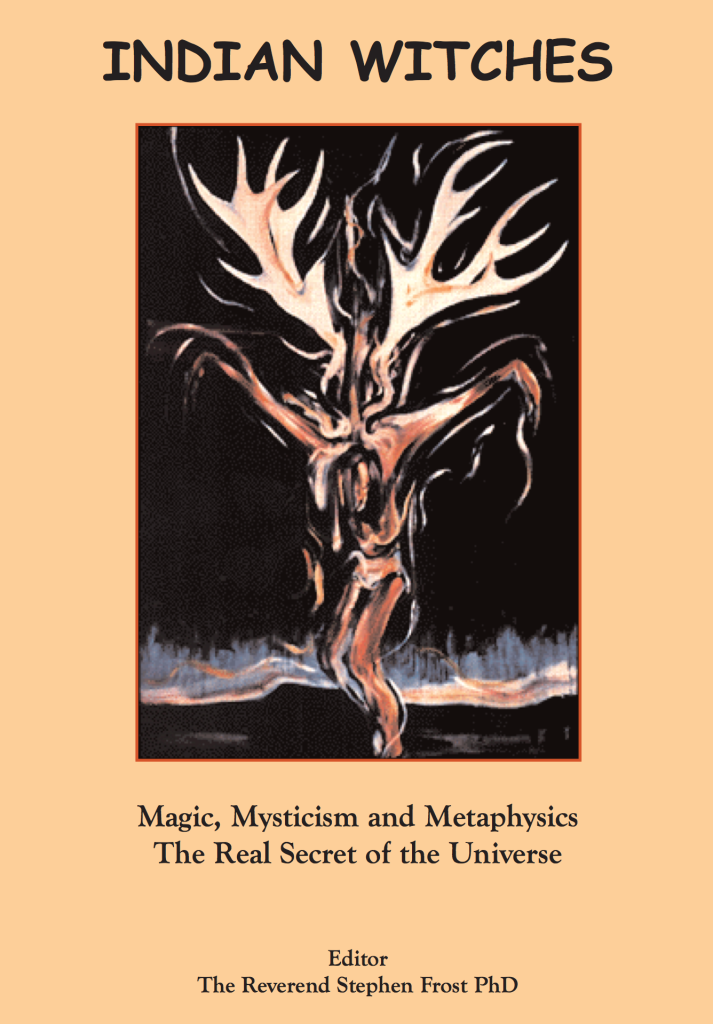 CRUCIFIX WITH ANTLERS Oil on Panal 5.5’ x 3’ 1977-1987 Shamanistic themes involving earth powers and metaphysical energies in relationship with the Passion of Christ, expressed here with ancient symbols for the divine quest—antlers and the crucifix—display an underlying unity in a variety of spiritual traditions and experience. In this work, the practical influence of shamanistic elements makes itself apparent. Christianity, Tantra (Buddhist and Hindu) and Taoism live off their inheritance from Shamanistic and Animist insights.

HOW DIONYSIUS SAVED HIS MOTHER FROM HELL

AND THUS, BY CHANCE, SAVES THE WORLD

Three Short Fictions of Magic, Mysticism and Rocket Science The Real Secret of the Universe

These three fictions spin-off a post-doctoral project, NEPSIS, at the University of California, Berkeley (ECAI) about perception, states of consciousness and religious initiation. These works are the entertaining version of tough metaphysical issues. But even here are challenges inherent in the creation of alternative realities for the serious seeker.

G. K. Odiak is currently on extended retreat in a wilderness region somewhere on the Pacific Rim. Or, he is roaming the face of the earth to effect its salvation. He has asked the above artist, Rev. Stephen Frost Ph.D., his advisor, to respond to any queries from readers. Please contact Dr. Frost through www.nepsis.com. All Rights Reserved © 2003 by G. K. Odiak And The Reverend Stephen Frost PhD

Fourth and fifth fiction variation from an original true story.

WARNING NOTES FROM THE EDITOR …The creation of this text, we’re told, required altered states of conscious- ness in the author. These include trans-temporal states that often engage in the writing. So, don’t be thrown off the track by grammatical irregu- larities such as tense disagreement, among others. Most often these are necessary for a valid depiction of the topics. Also, there are certain repeating themes and passages, ala the Tai Chi Long Form. As viewing a beautiful gem, each facet looks the same, but each captures the light dif- ferently. Persevere, the experience described here requires “letting go” in order to take in, to inculcate, or even just to perceive the spirit of this lamp. Both the content and the form of this work is very unusual!

This golem begins his story with someone else’s, since he knows neither his own beginning nor his purpose, nor his end. About this, he claims to know only what he was told. And he does not quite trust that history. The author begins in the middle of things. There is ‘nothing’ before or after and he says that might just be the ‘bliss’ he wants…

The Pilgrim as a Young Man

-The “Grand Affair” of spiritual vocation kicks in.

-The vicious, but handsome, young man.

-Pilgrimage to test the effects of pilgrimage.

thinker and the Black Widow are introduced.

-We arrive in India.

-What was supposed to happen. What really happened.

-The flight home: A vision.

-Who followed us home.

-Preparation is made for Pilgrimage to Greece.

-Death of the Sacred King

Re: Physiology, Cosmology and Ecclesiology

CHAPTER ONE: Stephanie and Chris 119

CHAPTER SEVEN: Chris in the Monastery 155

CHAPTER EIGHT: Stephanie in the Monastery 169

The President, the Priest, the Bishop

The Bindu and Michael the Archangel

The Golem Is Sighted